"It is desired that no document be released which refers to experiments with humans and might have adverse effect on public opinion or result in legal suits. Documents covering such work should be classified 'secret'."

Unethical human experimentation at Dulce involves allegations from several reports, that human adults, children, and babies have been abducted and sent to the unconfirmed Dulce Base, under MKUltra, since 1950.

The Armed Forces Special Weapons Project (AFSWP) began since 1947, to construct a number of underground Sites. The ten year project, spanning from 1947 to 6 May 1959, involved planning for the construction of deep underground military bases to “store nuclear weapons” after the Manhattan Project. The underground complexes are typically built into a mountain range. Global Security.org describes these complexes as being built “deep inside”. Two confirmed locations under this command was Manzano Base, NM and Killeen Base, TX.[2]

Manzano Base, NM, referred to as “Site Able”, began its operations on 04 April 1950, with major facilities completed by 1961. A presidential emergency relocation center was built deep inside Manzano Mountain as a command post for President Eisenhower. Global Security.org states on par 4, WMD, Manzano, that construction began in June 1947, and that the facility became operational in April 1950. It was a top-secret project designated “Operation Water Supply”. Construction crews carved out tunnels and blast-proof underground steel vaults with reinforced concrete and steel bunkers throughout the Manzano Mountains. Inside the complex, steel gates protected a hallway containing four chambers guarded with heavy safe door. Each vault stored a protective container called a “birdcage”.[2]

Killeen Base, TX, referred to as “Site Baker”,[2] was designated an underground “weapons storage area”.[3] The tunnel corridors are each 20 feet wide with 30 foot ceilings that penetrate to a depth of 80 plus feet below the mountain top, with 2-foot-thick concrete walls dug nearly 1,000 feet into the hillside. Interspersed throughout the complex are rooms of various sizes that are still equipped with steel rails for overhead cranes. Today it is now West Fort Hood.

As sincere researchers were publicly disclosing information about Dulce Base around 1995, female survivors of MKUltra were speaking out in court hearings by 1996. “Ultra” can be heard in the disclosures. One of the earliest appearances of “Ultra”, documented in UFO research, is in the the paper The Dulce Base by Jason Bishop III. The codename for Dulce Base is “ULTRA”.[4] 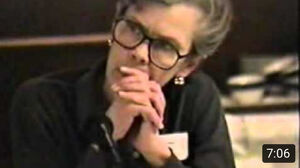 Biogenetic (DNA Manipulation) programming was conducted by use of various implants, some that allowed one to be controlled from a distance by RF (Radio Frequency) transmissions[8] (Compare Conspiracy Wiki, Influencing machines).

The elites that make up Government shadows effectively created a disposable slave-race, for medical culling of body parts and their own perverted pleasures. Human cloning experiments were being conducted between Dulce labs and the bio-genetic facility at Los Alamos.[8] Jason Bishop III references these experiments as "Disposable Biology".[9]

Thousands of young human females were being "created" in test tubes to be used as sex slaves. But the clones had proved to be less than satisfying because they didn't "suffer" the same way that once free victims did. They could be engineered to serve as better sexual tools, but they were nearly "mindless", and thus didn’t react with "fear" as a free young female could.[8]

Following the cloning program, came the abduction program - with forced "short-term" attacks that increased by 1980 to over 100,000 abductions a year. The facility was to be enlarged for "long-term" victims (who would stay there for as long as they lived) with numbers over 75,000 abductees.[8]

The U.S. Secret Government kidnapped and impregnated young females for the Dulce program to create the hybrid fetus. It was then removed after a three-month time period, before accelerating their growth in laboratories[8] (See The Dulce Papers).

From 'EDH Archives: Dulce Interviews; WC-289487346--80'...[8]
"Level 7 is worse... It was like a whore house for pervert ETs'. Human females were brought there for 'experiments', but you can't convince me that most of it wasn't just sadistic pleasure for the Greys. They wouldn’t just impregnate the girls, they would sexually torture them for hours.

And this was constant. Hundreds of Greys, and other species that seemed to be friends to the Greys, would come and go every week, for no other clear reason than to take sexual pleasure with the provided human females."

By the early 1970s, the number of missing persons, most being young white women, had gone up. In fact, abductions of humans were occuring on a worldwide scheme. Young white women were the most frequent victims, with little support for abductees should they survive.[8]

The fertilized eggs of hundreds of healthy young human females could be 'harvested' constantly, for unlimited embryo and stem-cell research, 'killing' uncounted human embryos in the search for everything from cures, to lethal infections, to cloning worker beings.[8]

Karla Turner investigated alien abduction claims and the associated MKUltra program at the cost of her own life. Turner died under mysterious circumstances on 10 Jan 1996.

Philip Schneider voiced in public—his information about Dulce Base. Based on information given in the testimony of Cynthia Schneider Drayer, Schneider died thereabouts on the same day as Karla Turner's death, on 10 Jan 1996.[10]

The Branton Files, compiled into the The Dulce Book, authored by Bruce Alan Walton was published in 1996.[11] Branton indicated that the informant, Thomas Edwin Castello, was either dead or missing a year after his interview, which might place his demise by 1996.

Thomas Castello’s final words were in regards to his greatest fear: “That the general public will forget THE TRAPPED INNOCENT PEOPLE in the despicable place [ Dulce ], and will ignore THE HUNDREDS OF CHILDREN, WOMEN AND MEN ADDED TO THAT PLACE EVERY MONTH.”[12]

Retrieved from "https://ufo.fandom.com/wiki/Unethical_human_experimentation_at_Dulce?oldid=32242"
Community content is available under CC-BY-SA unless otherwise noted.