In 1979, a Turís village farmer observed what he called "Los muñecos de nieve", meaning "Snowmen", who were dressed in white robes wearing "strange glasses that stuck out". What is more, their faces were blanked, having no facial features. There are at least two eye-witness accounts.[3] 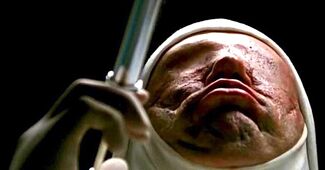 Retrieved from "https://ufo.fandom.com/wiki/Turis_abductions?oldid=38054"
Community content is available under CC-BY-SA unless otherwise noted.