Possibly seeded by The Tiamat

Saurians, Winged Ones, Draconians, Nursing Ones

Reptilians are a study in xenology based on mythologies, symbols and ancestral memories of Reptilian beings (evident in ancient religious rituals), as well as actual encounters similar or related to UFO phenomena.[3]

A prominent researcher specifically in the field of “Reptilian encounters” is John Rhodes who promotes the “Terrestrial Reptoid Hypothesis”. Since the early 1990's, John Rhodes has provided television and radio interviews, lectures, workshops, and media presentations regarding his hypothesis. Rhodes hypothesis claims that reptilian sightings are that of bipedal sentient ”reptoid beings” (Reptilian humanoids) that are native to Earth, essentially fellow "Terrans".[3]

The ‘Terrestrial Reptoid Hypothesis’ further contends that Reptilian ancestors retreated into underground caverns during environmental cataclysms, long ago, and there they have continued to thrive and evolve into sentient beings. Their intelligent descendants, according to the hypothesis, have science and military representatives that are secretly interacting with humans in both civilian and military services.[3]

Rhodes supports any of the notions that the Reptilians could be living under Earth's surface in Cavern-Cities of remote geological locations, such as state parks and wilderness areas, worldwide; as well as being “Off World”, or even possibly in some alternate vibrational state of reality—such as in other dimensions[3] (Compare Lokas or Talas).

According to John Rhodes, people have interacted with Reptilian beings in various parts of the world, since the dawn of mankind. Reptilians exhibit a marked degree of intelligence and an intense curiosity of the humans they encounter. Although some encounters appear accidental, these intelligent elusive beings appear to humans on purpose, such as in the middle of the night or in disguise by day. UFO investigators, from around the world, are reporting an increase in reptoid sightings from the Americas to Japan.[3]

Reptilians have been known to display the same passive, aggressive and neutral behavioral patterns as humans. Though our physiology and brain hard-wiring may be entirely different, humans and Reptilians appear to share the same sentient spiritual polarization and potentials for good and evil.[3]

In 1988, Charlene Lerch had contact with a benevolent reptilian. In her experience, the being asked, "Do you judge the way I look?". Her response was, "No, I don't judge your looks." To which the being replied, "Then I will help you."[4]

In 1998, for three years, Pamela Stonebrooke had reoccurring contact with a reptilian being in Houston, Texas.[5] She considers herself as an "experiencer".[6] Stonebrooke recounts her experiences in an interview, Secrets from the Underground volume 5 Pamela Stonebrooke. Her book "Experiencer: recollections of an intergalactic jazz singer" was canceled.[7] US officials interrogated her for details of her account.[6]

In Sweden of 1999, in the Transcriptions of Lacerta when E.F. discovered that the person who was visiting him for friendly chats, was really a reptilian,[8] E.F. almost lost his mind. At some point, he was able to regain his composure and re-continue discussions without incident. His experience is detailed in The Lacerta Files.

The Lacerta Files also describe “reptile beings” as "native terrans".[1] In terms of xenology, they are bipedal reptoids who are indigenous to Earth.[9] According to Lacerta, they live as subterraneans[10] who have evolved over a 160 million year time span. They formed a highly developed social structure of intelligent, self-aware, and even telepathic society.

According to Lacerta, the origins of Reptilians are “terrans” who were seeded on Earth by an unknown reptoid race (possibly by The Tiamat). They are sauria blooded descendants of the Iguanadon, refered to as Saurians. The “Saurians” evolved over a 160 million year time span. Only in the past 10 million years did they finally become an advanced civilization to develop their own space program. Since the Reptlians had established bases on other planets and moons in the Solar System, some might have been born on them. Thus, not all Reptilians are indigenous to Earth. “Off World” reptilians could be considered “extraterrestrial”.[11]

About 5 million years ago, a race of extraterrestrials came down to Earth, known as the Illojiim (Sum. Anunna, Akk. Anunnaki, Heb. Elohim) They came to the Earth to harvest raw materials[fn 1] (See also Alien economics and Alien economics 101). Lacerta claims that they were responsible for the evolution and development of mankind. Before “indoctrination”, humans and reptilians coexisted in peace.

To humans, the symbol of a serpent or dragon usually evokes caution. The appearance of a humanoid reptilian may heighten anxiety, prompt fear, or invoke dread. It is the challenge of the human psyche to remain calm, and to try not to stir up any concerns of fear, even under the most unusual circumstances.

The labels and names attributed to the Reptilians are in human terms. The Reptilians do not use the same words or expressions that humans use to identify them.[1] It must be noted that the label Draconian is purely a human expression and human identification. The word “Draconian” is not used anywhere in the published Transcripts of Lacerta, neither in 1999 or 2000 (See also Alien agenda).

According to Lacerta, caution is rightly due when one looks upon the symbol of the Ouroboros. Just as the nature of reptiles, the Reptilians are very territorial. The Ouroboros is a symbol of pride for all Reptilians who have colonized the Solar System, but also serves as a warning to humans that one is in their territory. A human will not be received in kind if an attempt is made to access their domains that are marked by an Ouroboros with seven stars. Humans are warned to vacate immediately.[1]

The Reptilian colonies of the Solar System are represented on the Ouroboros flag as: the Moon, Mars, Venus, and four moons of Jupiter and Saturn. These seven colonies are depicted by seven white stars on a blue background. Two of the seven colonies are now abandoned. Being well established on Earth, the reptilians as a whole, were at one time venerated as Gods.[1]

The Reptilians and the Humans are both Earth dwellers. Although there are congregations of reptilians who do not favor humans, there does seem to be consensus that extinction of the human race is not necessary. One advocate of the reptilians professes that, "we (reptilians) are not your enemy."[1]

The Reptilian distain for humans is based on a symbol for what mankind as a whole represent. That symbol lies with the Illojiim (Anunnaki/Eloheem). Outside of that, they "like" humans very much. What really seethes them under their bright green armored plates is the fact that humans think who they are. The humans are naive to believe they are "on top of the food chain". But it's not all the humans' fault, because that's how they were programmed to believe from "the begining".[1]

There are three hostile extraterrestrial races toward humans. They possess the ability to confuse and manipulate their victims. They have been known to project the appearance of looking reptilian, to evoke dread or to contain a situation. This tactic is common even amongst humans, such as the Boston Tea Party when the Sons of Liberty guised themselves as Native Americans to manipulate a situation. Since there are warring factions amongst the extraterrestrials, disguise is a common practice, especially in abduction cases where the hostiles are in pursuit of raw materials such as: DNA, cells, eggs, and blood plasma.[1]

At least four general social castes are identified, that presumably make up the Reptilians way of life. The following information is a very generalized approach and may not always be correct for the many variations of reptilian genetic evolution. A general sense of the Reptilian caste structure might be gleened from the chanuphis. Charles Gould’s 1886 depiction of the chanuphis depicts a cryptoid of a four-winged serpent that has supposedly gone extinct from Arabia.[12] According to Lacerta, the four-winged serpent is an ancient and sacred symbol for the Reptilians.[1] The Reptilians may be seen as arranged into four castes as represented by the four wings of the chanuphis. Their caste could be viewed this way: The Saurian reptilians as the spiritual-philosophical-astrological wing. The ancient Winged Ones as the champion-wise-strategic wing. The Draconians as the scientific-military-political wing. Finally, the Nursing Ones as the medical-nursing-breeder wing.

Reptilians have always had a place in human history since the earliest records of Sumeria. Many mythological stories of humanesque reptilians date back at least 6000 years ago. All reptilians indigenous to Earth are Sauria blooded descendants of Iguanodontia. When they cohabited with the humans, the Saurians were often venerated as "Deity's". The Saurians could be viewed as a spiritual-philosophical-astrological wing of the reptilians. They are also mentioned in various religious text, including the Hebrew Bible, the Quran, the Vedas, and ancient Mayan and Egyptian inscriptions. Some believe they were one of the few ancients that even taught humans how to build.

The Winged Ones are very ancient. They could be viewed as a champion-wise-strategic wing of the Reptilians. Brian Onley referrences them as Ciakars in his The Book of Man series. These may have been the "dragons" of old especially depicted in the many East Asian cultures. They are said to have large wings and are also said to be much larger than the more evolved modern reptilians. Some are described as even having horns on various parts of their heads; These features are contributed to ancient depictions of demons and devils. According to Lacerta, the "good" versus "evil" motif is a programming that humans are built with.[1] Many of the winged ones may have been benevolent, or at least docile to humans.

In ancient Sumerian legend, Tiamat (See also Tiamatians) was a primordial dragon that gave birth to serpent-like offspring. The Emerald Tablets of Thoth also makes reference to a galactic dragon called Poimandres, the keeper of wisdom and the power of the logos.[Needs verification] The primordial dragon motif is found in virtually all ancient cultures, leading some to believe that a dragon type may have been an ancestor of the Reptilians. 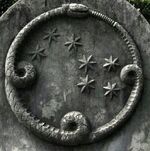 The Draconians could be viewed as a scientific-military-political wing of the Reptilians. As reptilians have evolved over millions of years, so have their science and development. Their technology has established colonies throughout the Solar System. They are said to have underground bases on the Moon, Mars, Venus, and four moons of Jupiter and Saturn. These seven colonies are depicted by the seven stars on their Ouroboros flag. Being well established on Earth, the Reptilians, as a whole, were at one time venerated as deities.[1]

The Nursing Ones of a medical-nursing-breeder wing, congregate to nurture and care for the breeder's eggs and their soon-to-be hatched younglings.