The article is about The Krill Report and its author.

O.H. Krill is an unknown author of The Krill Report. Krill gave what he called “the UFO situation” in the United States of America between 1947 to 1988. The report was part of a disclosure project along with The Matrix, Understanding Aspects of Covert Interaction With Alien Culture, Technology And Planetary Power Structures by Valdamar Valerian, that were both published in 1988. The Krill Report is believed to constitute the missing section of The Matrix at pp. 15 to 28. Both The Krill Report and The Matrix draw support and references to George Andrews and John Keel.

The Krill Report (1988) was uploaded to a Paranet Board in the late 1980s, probably to see how the UFO community would react, before publishing and making available The Matrix series. Paranet and Mike Corbin did not accept The Krill Report, and were quick to dismiss it. As a result, John Lear and John Grace were barred from Paranet (English, 1991).

Almost ten years later the report was circulated on a UFO mailing list, as early as January 1996. It was again received with heavy scrutiny and criticism,[1] and largely dismissed by those who thought it was the work of John Lear[2] or Bill Cooper[1] (See Michael Corbin investigates O.H. Krill)

The Krill Report, first published in January 1988, included addendums that are word for word in Val Valerian’s The Matrix. The Krill Report is believed to constitute the missing section of The Matrix at pp. 15 to 28. It is not known why The Krill Report was excluded from The Matrix, Val’s first book which was later published at the end of year 1988. The clear separation of documents suggests that the The Krill Report and The Matrix were written by two different authors, but not definitively. Also, “Valdamar Valerian” is a pseudonym used by John Grace, who is believed to be part of the Leading Edge International Research Group.

The Krill Report and The Matrix series by Val Valerian have influenced and shaped the conspiracy side of the UFO community. It has become the basis for Bob Lazar’s claims in 1989, Bill Cooper’s authored works in 1988-1991, and Branton’s “The Dulce Book” (1996). Its content (over time) ended up polarizing into core UFO / alien beliefs and conspiracy theories right into the millennium. The UFO terms and definitions that are presented in The Krill Report are still used and promoted today in UFO circles and conspiracy theory.

The original document might have been 14 pages long. When it was retrieved from IllumiNet BBS, it was divided into four files by Joshua "Illinois" Shapiro in 1996.[1] 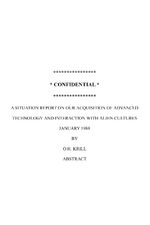 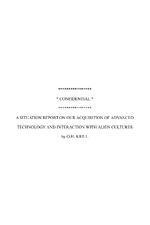 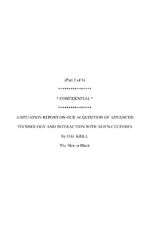 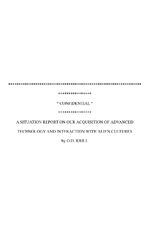 There are many key terms used in the 1987/8 Krill report that have become staple beliefs and influential to later authors and UFO researchers. Such as, but not limited to:

The Krill Report gives the list of Majestic 12 members identicle to the MJ-12 Document that ufologist Jaime Shandera recieved in 1984. Krill gives the list as follows:[3]

“The KRILL papers seemingly came out of nowhere and have stirred up a small hornets nest of speculation. Who is O. H. Krill? Is the information correct? Are parts of the text correct and parts incorrect? Where did the papers come from?

“I do not know who the author is and I do not know if the material is directly from KRLL or not. BUT IT IS APPARENT THAT WHOEVER O. H. KRILL MAY BE HE DID KNOW THE STORY OF KRLL. In my opinion the origin of the material will most probably be the object of much speculation. I cannot comment on the material which covers information that I have never seen before, however I can and will say that much of it is correct and agrees with the information that I have already released.

“I never saw the KRILL papers before in my life until the Sysop of Paranet RHO called my attention to them in a file on that board. This occurred only a few days before Christmas and I uploaded them to Ted Markley as soon as I could. He informed me however that he had already obtained them from another source.”

Conspiracy theorist Bill Cooper promoted that “O.H. Krill” stood for “Original Hostage Krill”. It was Cooper who gave the many variations of the name Krill, such as: Krll, Kryl, Cril,[4] and later Krlll.[5] He postulated that Krill was the name of an EBE that the United States came into contact with, some decades earlier. However, a lot of Cooper’s take on the UFO phenomena is a mixed bag of names and dates-which has stirred up a lot of flack[1] from serious UFO researchers.

Kurt Lochner posted a blog under the pseudonym “I.M. FEDDUP” in a very long rant against Bill Cooper in 1998. The following is a snippet:[6]

“The accusations and attacks by Mr. Cooper on all who dare to disagree with him spew forth from him in a seemingly never-ending stream. As was so clearly noted by reporter George Knapp of KLAS-TV in Las Vegas in his program 'UFO's: The Best Evidence', these individuals are immediately labeled by Mr. Cooper as frauds, phonies and/or members of the Central Intelligence Agency or the government complex desiring to discredit him. John Lear, Don Ecker, Vicki Cooper, Bob Lazar, Gene Huff, Budd Hopkins, Stanton Friedman, Bill Moore, Jaime Shandera, George Knapp, Craig Hewlett, Linda Moulton Howe, Tony Pelham, Bruce MacCabee and a multitude of others (with the list growing daily), have all been labeled by Mr. Cooper as frauds and agents of the CIA.”

“One evening during a television interview of Mr. Cooper, Lear overhead Mr. Cooper use the O.H Krill name and mention the fact that he had first seen this document while working for the Office of Naval Intelligence in the early 1970's. As Mr. Lear has related, he immediately pulled Mr. Cooper aside and quietly told him, "Bill, O.H. Krill is a joke! John Grace and I used Krill from Bob Emenegger's special 'UFO's: It Has Begun' because of a woman who allegedly channeled an entity named CRYLLL. Grace just pulled the O.H. out of thin air!" Mr. Cooper instantly unleashed his hostile self and in his usual denial of reality, replied that Lear was mistaken”

Although some believe that “Krill” was a pseudonym and Bill Cooper believed it was the name of an alien, it does stand as a legitimate surname. The surname Krill was found in Prussia where the family made a considerable contribution to the feudal society which shaped modern Europe.[9]

Some of the first settlers to the United States of this family name were:

The report that seemingly started it all— The Krill Report — hated on by some of the earliest of UFO researchers, almost as if they didn’t think of it first.

Community content is available under CC-BY-SA unless otherwise noted.
Advertisement