The Greys (UK), or Grays (USA), is a moniker that has been used by contactees to describe the appearance of their abductors. The abduction experiences vary from visitations, to communion, to kidnapping.

The Greys have been witnessed throughout many cultures, and many time periods on Earth, as believed to be evidenced by certain pictographs discovered around the world (See also Ooparts). More modern UFO researchers are believing that the Greys are not extraterrestrials, but have coexisted with humans since the dawn of man, whether humans were/are aware of it or not.

It’s believed that the “extraterrestrial” concept is actually a false flag that was promoted by The Aviary team of disinformants, who were highly active between 1980 and 2005. Some team members pushed Paul Bennewitz to the breaking point, after having made inquiries about Manzano and Dulce Base with the US government. Bennewitz was subsequently institutionalized.[2] Secret US programs related to the UFO-alien affair also cost the life of James Forrestal just decades earlier.

The various star systems and constellations (ie Rigel, Orion, Zeta) that The Greys are associated with are grounded on disinformation. A legit US document, dated 1947, from the FBI archives[3] warrants a look at Memorandum 6751—where it mentions that there is another world "which interpenetrates with our own and is not perceptible to us." Continuing, "The region from which they come... corresponds to the Lokas or Talas" (a Hindu concept).[note 1] The details of Memorandum 6751 are rather cryptic and have likely withheld further information, in light of senior US officials having to digest this paper. For sixty-three (63) years the memo had been locked up until the year 2010 when it was declassified.[4]

Because of certain historical indicators showing a presence among humans in history, and their ability to keep well hidden, the Greys may be comparable to the Jinn of ancient times. Jinn is an Arabic word that means "to hide" or "to conceal" (See also Entities). The Jinn were known to be “tricksters” in the ancient world, perhaps by their ability to disguise themselves as animals. Zoomorphic features are also seen in the ancient pictograms of the Great Ennead (Council of Nine). Interestingly, the “Council of Nine” ruled by “TA” (or “Ptah) was documented by Paul Bennewitz in 1986, during his investigation of Manzano Base in New Mexico. Bennewitz described a hierarchy in place over beings who are described exactly how abductees describe the Greys. Bennewitz began his UFO-alien investigations as early as 1979.[5]

As of 2018, nearly half of all alien sightings (determined to be 43%) are of Greys.[6] As of the turn of the 21st century, Greys make up approximately 75% of all aliens reported in the US, 20% of all aliens reported in Mainland Europe, and 12% of all aliens reported in Britain.[7] Greys are commonly sighted amongst youth,[8] but are not often revealed until spoken about later in adulthood.[9][10] In multiple reports, a buzzing sound is initially heard, either before the sighting or a missing time episode (which indicates that an alien abduction has occurred). An upsidedown triangle, or V shaped symbol,[11] has been observed on the right chest of the Grey alien.

"They were very short, shorter than five feet, and they had very large bald heads, no hair. Their heads were domed, very large. They looked like fetuses. They had no eyebrows, no eyelashes. They had very large eyes – enormous eyes – almost all brown, without much white in them. The creepiest thing about them were those eyes. Oh, man, those eyes, they just stared through me."

From abduction reports, Greys are often reported as being about 4-foot tall, typically grey skinned, having three long finger digits sometimes seen with an opposable fourth.[12] Several "insider" accounts have noted reptilian features,[fn 1] such as the ability to absorb nutrients through their skin[13] as some known lizards do (ie thorny devil lizard).

Another reptilian feature may be the chameleon colors that have reportedly been witnessed: from grey to beige, brown, and a bluish-grey tint;[13] possibly also green and mushroom-white,[12] even orange[14]—all dinosauroid colors. UFO researchers often attempt to label the Greys into separate species based on the different skin colors that are reported; such as assuming the browns to be from Zeta Reticuli or the Greys from Orion. But these assertations are a combination of disinformation and misinformation. If the Greys are a type of reptilian, they would fall into a class of dinosauroid. According to Branton’s Castillo interview and The Lacerta Files, Reptilians view themselves as native to Earth—Saurians. The Greys (smaller) and the Reptilians (taller) are associated with each other and have been seen working together at black sites around the world.

"The grays are photosensitive, any bright light hurts their eyes. They avoid sunlight, and travel at night. Camera flashes... [might] buy enough time to escape... Their brain is more logical than ours and they do not create ’fun’. They do not understand poetry either. What really confuses them is saying things in "pig-latin"."—Thomas Castello interview; Branton, pub. 1996.

"[Greys can] read your INTENT, because they use your body’s frequency. The human race broadcasts a frequency, that they recognize as an electromagnetic impulse. Each person has a slightly different frequency, that difference is what we call ’personality’. When a human thinks, they broadcast strong impulses, in the case of ’fear’ the frequency is ’loud’ and easy to recognize."—Castello interview, pub. 1996

"A calm and composed mind-set should be far more difficult to ’recognize’."-Branton, 1996.

From insider reports, there seems to be a hierarchy with the Greys. The “tall Greys” are considered leader types. “a very large group, I say large, they were 6-8 maybe sometimes 9 feet tall and they were humanoid, but they were very pale, very white, didn’t have any hair on their bodies at all.”—Robert Dean.[1]

Draco is more or less a title used by human personnel at US black sites, assuming that its tolerated by the Reptilian leaders. Their actual titles are unknown and unpronounceable to humans. Lacerta never uses the term Draco or Draconian in neither of her known interviews (1999, 2000). The title has been misapplied to the Draco constellation, in the assumption that there is a connection. The separate interviews of Castello and Lacerta stress that the Reptilians are Earth natives who, more or less, view themselves as Terrans. Castello's interview goes on to say that humans are even viewed as “squaters”.

Notice the wrap around eyes depicted in the below artifacts from two separate cultures: 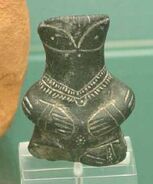 Dogu artifact
Add a photo to this gallery

Several Greys have allegedly been imprisoned and interrogated by US officials at certain classified DUMBs.

The Greys is the most common alien species used in pop-culture, specifically in films and television. This species appeared in many TV shows and films. Some of the most notable are listed below.

Retrieved from "https://ufo.fandom.com/wiki/Greys?oldid=25938"
Community content is available under CC-BY-SA unless otherwise noted.