This is a psychology article concerning core concepts in mythology, ufology, and the paranormal, with the intention to contemplate the nature of what is good and evil.

Good and evil is a human concept pondered by philosophers and theologians alike, to determine the intent of the protagonists and antagonists of legend, ufology, and paranormal studies. The human drive behind pondering good and evil, is psychologically rooted for the preservation of humanity. Virtually all decisions and judgements are made based on whether we (humans) “think” something is good, or bad.

The following content is comprised of rhetorical questions to ponder what is good and what is evil, or if it even really matters.

Humans want to know who the “good guys” are, and who the “bad guys” are: Are they good spirits, or bad? Are they good aliens or evil aliens?[1] Are they a Confederation,[2] or a Federation[3] (are names significant? Why do names change?) ? Are they “beings of light”,[4] or Luciferian?[5] Are they Draconian,[6] or Reptilian? Are they Archons, or Anunnaki? Are they all the same - to elevate us as humans, or just hellbent on human domination (to enslave and feed off of us)?[7] Is David Wilcock’s “Alliance” on our side,[8] or just using us as puppets? Was World War II a proxy war (Compare Paul Hellyer symposium[9]) for an even greater (possibly spiritual) struggle in our midst? Are we bystanders in a fight between extraterrestrial Allied forces and an Axis powers equivillant? Is there really a power struggle between alien factions,[7] or are we just caught in the middle of a galactic theatre between good and evil?

Why does the tetraskelion (or Swastica) keep popping up in ufology?[10] Is it good or evil? Is it good when reversed? Is reversed really evil? Which way is “reversed”?[notes 1]

Is the pentagram good or evil? Is it good and evil? Is it good right-side up (as portrayed as a star on US military aircraft), or is it evil no matter which way it’s turned? Does it become evil if a circle is drawn around the star? Is it evil when a star is “upside down”? What constitutes as upside down? If an “entity” is invoked, are they seated, or standing, next to you, where all are observing the pentagram in the same position? From the perspective of a seated human looking at the pentagram “upside-down”, it would be viewed right side up to an “entity” on the opposite side of the star. Is the position of the pentagram either good or evil dependent on the human perspective?

Are goats good, or evil?

The psychology behind these concepts is for the pursuit of human preservation and longevity.

This section is still under construction...

Topic under construction
In the Gospel of John, there is a dialogue between Jesus and Nicodemus, where a comparison is made between the raising up of the Son of Man and the act of the serpent being raised by Moses for the healing of the people.[14][15] 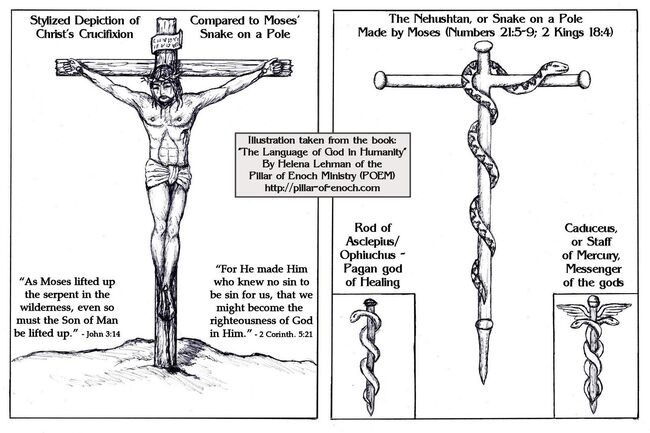 The “alien races”[16] (in no particular order) are: “Nordics”,[17] “Greys”,[18] “Little green men”,[19] “Blues”,[20] and “Tall whites”[21]. Are these racist expressions of identification? Does the Great White Brotherhood factor into the racial formula?[22] What is the “black lodge”?[23] Does white mean good, and black mean evil? What is the purpose of gray magick if white magick is all good? Is gray magick, because of its “neutrality”, better than white magick as it is to black magick? Is there a true difference between white and black magick?[24] White and black auras?[25] White and black aliens?[26] And finally, white and black people?

Explain how the above is mixing apples to oranges when they are all fruit.[fruits 1]

An outstanding question, especially by non-believers of higher intelligence over mere humans, is: If there is an advanced race existing amongst us, why haven’t they eradicated humans already? Why hide in the shadows, and not make themselves known?

Possible answers
From an acute conspiratorial view: it is easier to run a shadow government behind the scenes, that can employ black projects without needing a law makers’ consent (i.e. congress), or consent by “The People”.

From an obtuse conspiratorial view: the “laws of nature” are balanced and set, and no matter what “evils” are done, it is eventually balanced out. So rather than squashing its resources, the higher intelligence chooses to “use” its resources (i.e. humans, the way we use cattle as a resource to breed, milk, and use for food) with as less collateral damage as possible. If a cow is not privy to human standards of living, how can humans be privy to the methods of a higher intelligence?

Please note, there is a tinge of sarcasm for the following real perspectives:

Retrieved from "https://ufo.fandom.com/wiki/Good_and_evil?oldid=22409"
Community content is available under CC-BY-SA unless otherwise noted.